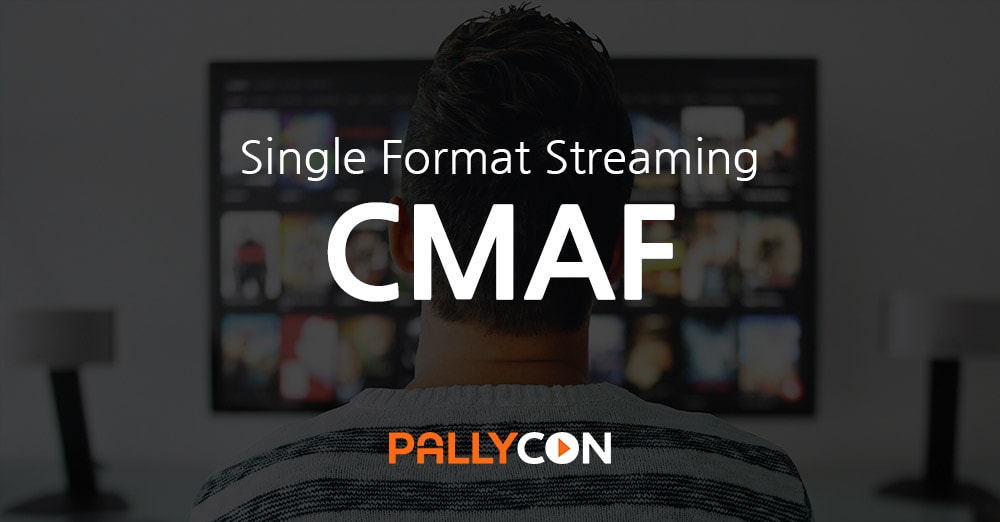 by Daniel Kim
in Multi-DRM

In the early days when online video services started to apply DRM, most of them used `single DRM` from a chosen DRM vendor.

Many service providers have deployed a single DRM to content packaged in a single format (HLS, Smooth Streaming, HDS, etc.) and provided services across multiple platforms using plug-ins or SDKs for the DRM.

At this time, services such as Netflix have prepared contents by applying almost all formats and DRMs to support as many platforms as possible. Today, Netflix is packaging hundreds of versions of a single piece of content in a combination of several video formats, codecs, resolutions, and bitrates.

`Single DRM` had problems such as the inconvenience of installing browser plugin and limited platform support. To solve this problem, each platform started to provide its own DRM. And `Multi-DRM` is used to support multiple platforms. 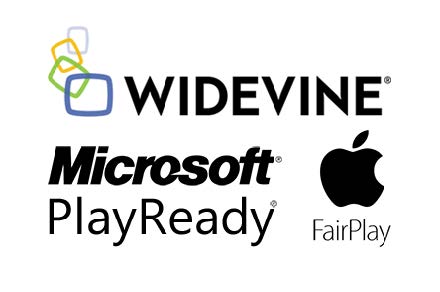 Although multi-DRM has been able to eliminate user inconveniences and support more platforms, service providers have to prepare one content in two formats (DASH and HLS) to support multi-DRM.

In this post, we will look at `unification of multi-DRM contents` through a new standard called `CMAF`.

To support as many platforms as possible using multi-DRM, the content must be packaged in two streaming formats: 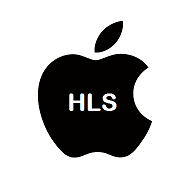 The HLS protocol created by Apple is the most popular streaming method, which accounts for about 70% of the total (including DRM and Non-DRM) online streaming.

Especially, it is necessary to package contents with HLS to apply `FairPlay Streaming` DRM which is essential for premium content security on Apple devices.

HLS has the following features.

The MPEG-DASH is the next most popular streaming format after HLS. DASH content supports `CENC (Common Encryption)` standards, so PlayReady and Widevine DRM can be applied to one content.

DASH has the following features.

To solve these multi-DRM content issues, related companies have made efforts to create a standard for single format at various stages, including video codecs, containers, encryption methods, and streaming protocols.

In February 2016, Apple and Microsoft propose the CMAF specification to [Moving Pictures Expert Group (MPEG). The CMAF standard was officially announced by MPEG in January 2018.

CMAF was created for three purposes:

Among the purposes of the above CMAF, `minimizing video latency` is called as `Ultra Low Latency` technology, and it has become one of the biggest topics in the live streaming industry in recent years.

Ultra Low Latency streaming using CMAF will be discussed in detail in a separate post.

CMAF is constructed by referencing media chunks made in a single specification from the m3u8 playlist in HLS or the mpd manifest in DASH. Depending on the client, it will play in DASH or HLS format, but the media files is a single set for the content. 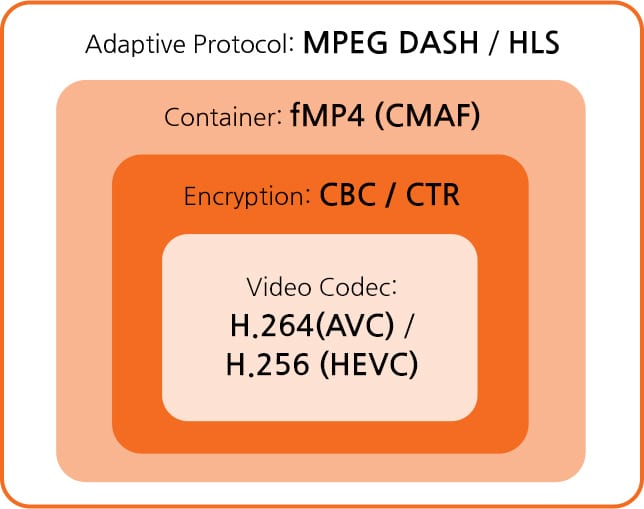 To this end, Apple, Microsoft, Google, and other related companies have discussed the following areas.

The AES encryption method that encrypts the media chunks of multi-DRM content has been divided into the following two methods.

CMAF can use both encryption modes, but one of them should be a standard for the single content format.

So each platform and DRM provider has worked to support CMAF as follows:

As we have seen above, with the efforts of related industries, the CMAF single content has become a reality. In order to service CMAF multi-DRM contents, the following conditions must be satisfied.

In the above conditions, license server and packager can be handled by DRM solution vendor, but CMAF support of client device is still limited. 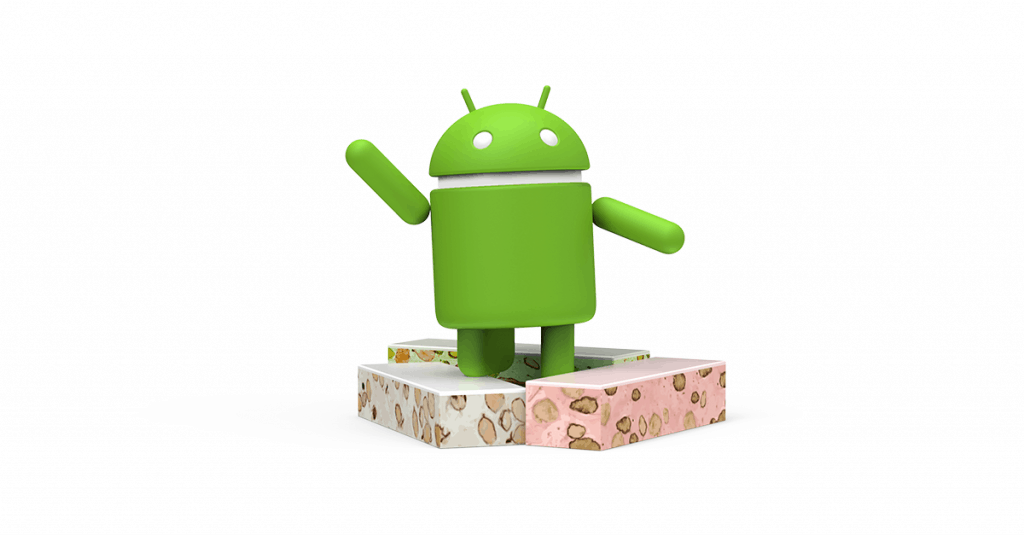 First of all, CMAF is supported by Android 7.1 or later devices. But there are still many devices older than 7.1 on the market.

And Windows PCs cannot play CBC-encrypted PlayReady DASH content because the OS does not support CBC mode yet. Instead, you need to use software-based Widevine DRM with Chrome/Firefox browser.

Also, because there are HTML5 players that do not support CMAF yet, you should also check if your HTML5 player supports CMAF. 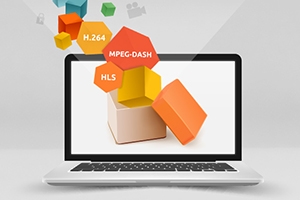 You can generate single media chunks encrypted with AES-128 CBC mode and DASH(mpd) and HLS(m3u8) playlists with the `–cmaf` option of CLI packager. (See the CLI Packager Guide)

PallyCon Mobile SDK for Android and Apple devices also supports playback of a single content packaged in CMAF. (in supported devices only)

For iOS, over 90% of devices (iOS 10+) currently support CMAF as of 2019.(Note) However, as of October 2018, more than half of the Android devices (7.0 or earlier) are still not supporting CMAF.(Note) Therefore, we do not recommend applying CMAF multi-DRM content to mobile-targeted services.

For services that only target PC browsers, you can serve CMAF content to most Windows and macOS PCs through Chrome/Firefox and Safari browsers. In this case, however, because Widevine DRM applied to Windows (Chrome) is software-based, it is not suitable for premium content such as Hollywood studio movies. Also, it has a disadvantage that it does not support Windows default browsers such as Edge or IE11. This issue can be solved when Microsoft add CBC mode support to Windows OS in the future.

H.264(AVC) is the most popular codec for SD/HD/FHD content and it is supported by most devices. So AVC is the best codec to be used for CMAF content. 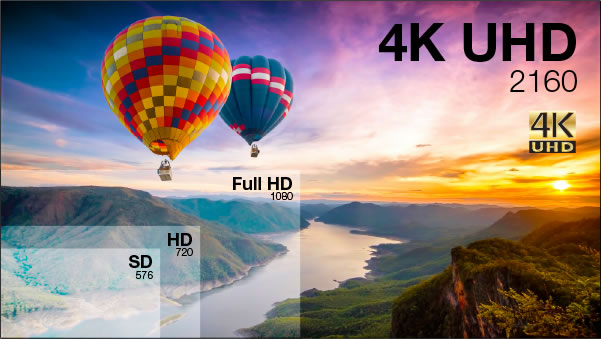 However, 4K/UHD content uses HEVC or VP9 codec supported by platforms as below:

For Android, HEVC or VP9 codec may not be supported depending on the hardware specification of each device.

Since VP9 codecs can not support Apple devices and HEVC is not supported by some browsers such as Chrome and Firefox, we recommend CMAF packaging with HEVC codec for UHD content that requires hardware level security.

Conclusion – Not there yet, but it is promising

With the use of multiple streaming formats such as DASH and HLS, online video service providers are faced with complex packaging processes and increased storage/CDN costs.

But it is difficult to apply CMAF in most multi-platform services due to client devices which does not support CMAF with multi-DRM.

Currently, it is not recommended to apply CMAF to DRM content. But most of the streaming content will be unified into CMAF as the proportion of supported devices increases in the future.

Please keep an eye on `CMAF` standard, which is leading the innovation of online streaming with the advantage of `efficient workflow` and `minimizing live delay`.